Whether you are new to drinking matcha or you’ve been sipping on this green tea for some time, you have likely heard of ceremonial grade matcha and culinary grade matcha. But what is the difference between the two? And is one grade better than the other? Keep reading to find out what sets these two tea grades apart and discover which is right for you!

What Determines Different Grades of Matcha?

Before we had matcha lattes and matcha ice cream, matcha tea was originally served as a ceremonial beverage during a Japanese tea ceremony, or “chado.” Due to its rise in popularity over the last decade, matcha is now used in a variety of ways, which requires different types of tea grades.

Culinary grade matcha can be further broken down into three additional grades:

The different grades of matcha are determined by several factors, such as: Ceremonial grade matcha is the highest quality tea grade you can consume. It’s usually the most expensive kind of matcha tea due to its high demand and the amount of time it takes to produce.

This grade of matcha is made from the youngest green tea leaves, which are harvested during Ichibancha, also known as the first harvest from late April to May. These leaves are found at the top of the green tea bush and are usually very delicate. Because the leaves are young and fresh, they have a higher concentration of nutrients like the amino acid L-theanine and chlorophyll. The L-theanine gives a natural sweetness to the matcha, while the chlorophyll provides a vibrant green colour.

To make ceremonial-grade matcha, the veins and stems of the tea leaves are entirely removed to ensure only the sweet centers of each leaf remain. The leaves are then slowly ground between two large stones of pure granite to create an ultra-fine powder. It takes about an hour of grinding to produce 1 ounce (30 grams) of our Tea Lover’s Organic Ceremonial Matcha from My Matcha Life®.

Ceremonial-grade matcha tea is most often used for drinking on its own. Ideally, it should be whisked into water without milk or sugar. If you add any additional ingredients, the flavour is lost. You also do not want to cook or bake with ceremonial-grade matcha because it is the equivalent of cooking with a vintage bottle of wine. 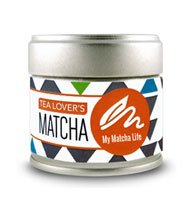 Our Tea Lover’s Ceremonial Grade Matcha from My Matcha Life® is the finest quality matcha available. Compared to our other matcha tea grades, the flavour is sweet and mild, which adds to its superior quality.

Unlike most matcha which is harvested by machine, the first-harvest tea leaves in our ceremonial grade matcha are hand-picked and offer the highest concentration of nutrients. That means it’s packed with L-theanine, which works in harmony with natural caffeine to provide a calm, sustained energy boost without jitters. It’s also rich in antioxidants like EGCG catechin, which is believed to reduce inflammation, aid in weight loss, and boost immunity.

[Check out our MML blog, 6 Health Benefits from Drinking Matcha Tea to learn more about its amazing effects!]

As the name suggests, culinary-grade matcha is used for cooking, baking, and creating mixed drinks such as matcha lattes and smoothies.

Even though culinary matcha is considered a lower grade compared to ceremonial grade matcha, it is important to get a good quality one. A second-harvest matcha, like our Foodie’s Japanese Matcha, is ideal. It has a strong enough green tea taste to cut through other flavours used in baking and mixed beverages and a bright green colour to spark up your favourite culinary creation.

While ceremonial-grade matcha is made from young tea leaves, culinary-grade matcha is generally made from older tea leaves. These are harvested during Nibancha, or the second harvest, which takes place from June to the end of July, and even a third harvest in early autumn.

Almost all culinary matcha is ball crushed or heat pulverized into green tea powder. However, My Matcha Life® is one of the very few brands that slowly stone grinds the second harvest matcha and shade covers it. Both crushing and pulverizing reduce matcha’s nutrients and colour, and add to the bitterness. Very few culinary grades are bright green, but our Foodie’s Matcha is! In large part due to the shade covering and gentle stone grinding! Our Foodie’s Culinary Grade Matcha is made from shade-grown second-harvest leaves. The balance of nutrients (especially catechins) and strong green tea flavour make it the perfect matcha powder for baking and mixed beverages.

Which Grade of Matcha is Right For You?

When it comes down to selecting the right grade of matcha tea powder for you, you have to ask yourself one question: What will you be using it for? For example: